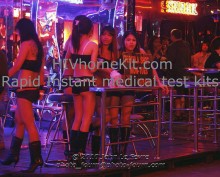 Widely known as the sex tourism capital of the world, Thailand appears to be losing the battle against the spread of HIV with fresh statistics showing more than one new infection every hour and more than 8,700 new HIV positive infections annually.

The alarming figure, which primarily includes only Thai citizens and few of the 15 million foreign tourists who visit the country annually, show that education programs regarding safe sex practices in the Southeast Asia nation are failing to halt the spread of the disease, despite the country having received almost $US235 million in Global Fund grants since 2003.

The figures also raise questions over the success of the Thailand government HIV treatment program, with little more than half of Thailand’s 530,000 recorded HIV afflicted availing themselves of almost free treatment.

While Thailand Public Health Minister Pradit Sinthawanarong said the low number of HIV positive Thais receiving treatment through the government-run program was due to “ignorance of their condition”, HIV and sexual health outreach workers say the major reason is the the loss of anonymity that comes from enrolling in the programs and fear family, friends or employers will find out about the persons HIV status.

The figures were released yesterday as part of a call by Thailand’s Disease Control Department (DCD) urging parents of teenage school children to consider giving their children two condoms a day to fight rising teen pregnancies and the spread of sexually transmitted diseases (STDs).

The high level of sexual activity and lack of education regarding the spread of STDs and pregnancy amongst Thailand teens is reflected in health department figures, he said, with 42 percent of people testing positive for a STD aged under 20 and about 80 percent of females in this group pregnant.

Dr Pornthep said parents should either buy condoms for their teenage children or obtain them from health offices, saying the Thailand government purchases 60 million condoms a year for distribution.

In attempt to improve the level of undiagnosed HIV in the Thai community the Thailand Red Cross Society said it would set up free HIV screening centres at five Bangkok shopping malls to mark World AIDS day where people can be tested free for the virus.

Secretary-general of Thailand Red Cross, Phaen Wannamethee, said people will be able to stop at the testing centres while shopping and receive the results of their  test about one hour later.