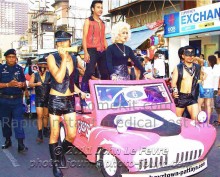 Thailand’s Aids Access Foundation (AAF) says news that Thailand is recording more than one new HIV infection each hour is proof the “country is in a crisis”, blaming the alarming number of new HIV infections on a lack of government interest and an inadequate allocation of money for HIV/AIDS prevention.

Thailand’s Ministry of Public Health (MoPH) estimates that more *464,414 people are currently living with HIV/AIDS in the Southeast Asian kingdom renowned internationally for the accommodating males and females who work in the country’s thriving sex industry, though sex workers are said to represent the lowest at-risk group. (*Ed: Independent figures put the number of people living with HIV/AIDS in Thailand at more than 530,000)

The ministry says almost 9,500 new HIV cases will be recorded in Thailand in 2012 with some 37 percent of infections or 3,530 new cases being men who have sex with men and 2,325 cases being women infected by their HIV positive partners. Intravenous drug users are said to represent 9.66 percent or 915 of the new cases while Thailand’s notorious sex workers are said to make up less than 3.39 percent of new HIV cases detected this year.

The MoPH says more than one million people are believed to have been infected with HIV/AIDS in Thailand (does not include foreign tourists) since 1984 and blames unsafe sex and low HIV testing rates for the rise.

However, the AFFs Nimitr Tienudom said the Thailand government is partly to blame for the increase by banning public education campaigns promoting safe sex until after 10pm at night, while blood test results require two visits to a clinic or hospital and take three days for the results to be known.

“The earlier people find out about the infection, the earlier they can start being treated” Mr Nimitr said, and urged the Thailand government to provide finger-prick rapid HIV test kits for people in high-risk groups.

“Some schools have even stopped us from holding activities to raise awareness among students. They won’t even allow us to install a condom-vending machine out of embarrassment,” he said. 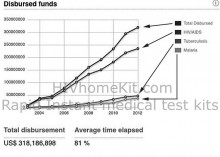 Thailand will receive more than $US16.8 million in Global Fund grants to fund HIV/AIDS treatment and prevention programs in 2012 bringing the total received since 2003 to $404.891 million. Chart: Courtesy The Global Fund

Dr Pornthep recently called on Thailand parents to encourage their school-age daughters to carry two condoms in their bags “so they are always prepared, the same way that they carry toothpicks or their mobile phone”.

A recent study showed that the age that Thais start having sex is getting younger with about 20 percent of Thai girls losing their virginity at the age of 12, while 40 percent are sexually active by the time they reach 16.

“Teenagers are at high risk” Dr Pornthep said, adding that 80 percent of Thai teens admit to not using condoms.

Since 2003 Thailand has been awarded more than $US404.891 million in grants by The Global Fund, a public-private partnership and international financing institution dedicated to attracting and disbursing resources to prevent and treat HIV/AIDS, TB and malaria globally, with almost $235 million already having been received, the bulk of it by the MoPH. 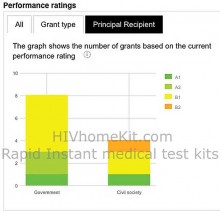 The majority of the $US404.891 million Thailand has received from The Global Fund since 2003 has been channeled through the Thailand MoPH. Chart: Courtesy The Global Fund

Despite the large amount of money put at the Thailand government’s disposal less than half of HIV positive Thais utilise the the government sponsored free HIV programs because of the loss of anonymity involved and fear that other people will find out their HIV positive status, HIV workers claim.

Source: The Nation: ‘Country in crisis’