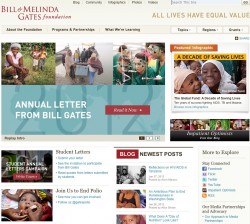 Microsoft founder and philanthropist Bill Gates, through the Bill and Melinda Gates Foundation, has thrown The Global Fund to Fight AIDS, Tuberculosis and Malaria (The Global Fund) a $750 million lifeline coinciding with the group’s 10th-anniversary. Describing The Global Fund as one of the most “effective entities” the Gates Foundation supports, the former Silicon Valley tycoon and world’s second wealthiest man said he was disappointed at the focus on reports last year which detailed the misappropriation of some funds in Africa, saying “if you’re going to do business in Africa, you’re going to have some losses”. Mr Gates said it is “disappointing” to see some people focus on a “small misuse of funds. The internal checks and balances have worked … END_OF_DOCUMENT_TOKEN_TO_BE_REPLACED