Australian consumers are unlikely to see oral HIV rapid tests on sale in the near future with the country’s regulating body, the Therapeutic Goods Administration (TGA), saying by law it is not allowed to evaluate applications to supply HIV home test kits.

At the same time Levinia Crooks, chief executive of the Australasian Society for HIV Management, says that while the OraQuick rapid HIV instant test kit by OraSure Technologies is relatively easy to self-administer, it is not a highly sensitive test.

Earlier this week the US-FDA approved the OraQuick rapid HIV instant test kit for over-the-counter (OTC) sales in the USA, despite researchers finding that in home HIV testing use the oral HIV rapid tests returned a Specificity of 99.98 percent (the proportion of negatives which are correctly identified), while Sensitivity was 92 percent (the proportion of actual positives which are correctly identified). (Ed: The HIV Home Kit rapid HIV Home test kit uses whole blood from a finger prick and has a Specificity of 99.97 percent and a Sensitivity of 99.6 percent). 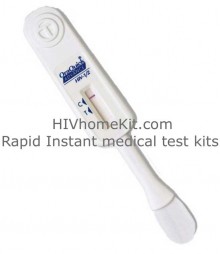 Oral HIV rapid tests not up to the standard of of rapid HIV instant test kits that use a finger prick of blood – Levinia Crooks, chief executive of the Australasian Society for HIV Management.

Ms Crooks told the Australian ABC “with an oral test, there can be quite a considerable delay between when the person’s infected and when that infection will be detectable by the [oral HIV] test.

“In looking at the tests for use at point-of-care in Australia, we’ve been focusing on tests that use finger-prick blood rather than an oral sample because the oral sample tests just aren’t up to the same standard”, she said.

While no rapid HIV instant test kits are approved for home HIV testing in Australia, this is due to legislative reasons rather than HIV rapid test kit quality issues.

According to Ms Crooks “there aren’t any [home-testing kits] legally on the market in Australia and it’s against the law in Australia to do home testing of infectious diseases.

“It’s largely a historical position around wanting to make sure that those sorts of diagnostics were done in a controlled manner.

“If somebody’s testing themselves, they’re not really in a position – well many people won’t be in a position to equip themselves on how to deal with a result if it is positive”, she said.