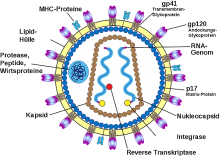 An analysis of the modestly successful Phase III RV144 clinical HIV vaccine trial in Thailand between 2003 and 2006 involving more than 16,000 people has produced new information that may assist in the development of a broadly protective HIV vaccine.

The RV144 HIV vaccine trial led by Supachai Rerks-Ngarm, MD., of the Thai Ministry of Public Health’s Department of Disease Control and supported by the U.S. Army in collaboration with the National Institute of Allergy and Infectious Diseases (NIAID), tested the safety and effectiveness of a prime-boost regimen of two vaccines, a modified canarypox vaccine, ALVAC-HIV (the primer dose), and a glycoprotein 120 vaccine, AIDSVAX B/E (the booster dose), on volunteers aged between 18 and 30 years of age in Rayong and Chon Buri provinces.

Following the HIV vaccine trial’s report in 2009 more than 100 scientists from 25 institutions have been examining the findings to discover how the RV144 HIV vaccine delivered modest protection.

How the RV144 HIV vaccine worked

Analyses of blood taken from a subset of RV144 HIV vaccine study participants – 205 HIV vaccinated volunteers who did not contract HIV and 41 who received the HIV vaccine and later became infected with HIV – found that those who produced relatively high levels of one HIV antibody, a member of the immunoglobulin G, or IgG family, were significantly less likely to become infected than those who produced a different HIV antibody.

In Immune-Correlates Analysis of an HIV-1 Vaccine Efficacy Trial published today, April 5, 2012, in the New England Journal of Medicine, scientists said the binding antibody attaches to a part of the outer coat of the HIV virus called the first and second variable regions, or V1V2, which may play an important role in HIV infection.

Researchers plan further studies in primates using the RV144 HIV vaccine regimen and other vaccines to determine if high levels of V1V2 antibodies directly caused the modest protection found in the RV144 HIV vaccine study, or if they are linked to other factors that have not yet been identified.

The authors of the study said more research is needed to understand whether these new findings will be relevant to other types of HIV vaccine, or to similar HIV vaccines tested against HIV strains from other regions, or against different routes of exposure to the HIV virus.

Footnote: The RV144 laboratory research was initiated and coordinated by the US Military HIV Research Program at the Walter Reed Army Institute of Research, the US Army Medical Research and Materiel Command and the Bill and Melinda Gates Foundation co-funded the research along with the NIAID.