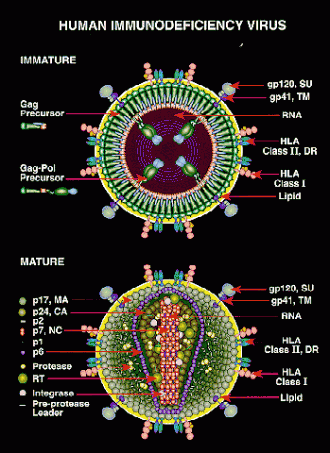 French doctors fear the rare “group N” strain of the human immunodeficiency virus (HIV) has spread outside of Cameroon, where it was first diagnosed in 1998, after blood samples taken from a man admitted to Saint Louis Hospital Paris in January reacted positively to HIV tests for the strain.

The 57-year-old presented with a rash, fever, swollen lymph glands and genital ulceration, and on January 9, developed facial paralysis.

Initial HIV tests detected high levels of a virus in the HIV-1 family, with additional HIV tests finding the blood samples reacted to an antibody essay of the group N strain.

When doctors traced the man’s sexual history they concluded he more than likely became infected with the HIV-1 group N virus as a result of sexual intercourse with a partner in Togo, where he had recently visited.

According to Professor Francois Simon, this indicates the HIV-1 group N primary infection is now circulating outside Cameroon emphasizing “the need for rigorous HIV epidemiological monitoring”.

Professor Simon said detecting the HIV-1 group N infection was important, because the patient suffered severe symptoms, in addition to a rapid decline in his immune system, reflected in his white blood CD4 count.

The medical team said the man responded well to a powerful five-drug combination of antiretrovirals, but needs close monitoring in the future.

HIV group N is is one of four sub-types of the HIV-1 virus family, of which group M, is the most prevalent, while HIV group O and HIV group P are rare, like HIV group N.

Researchers believe the HIV group N virus may have crossed from chimpanzees to humans as a result of handling bushmeat infected with the simian equivalent of HIV, while HIV group O and HIV group P are thought to have crossed species from gorillas to humans.

The minority HIV-2 virus strain is also believed to have entered the human population from primates.

Since it’s discovery in 1998 more than 12,000 HIV-infected people in Cameroon have undergone HIV tests for the HIV group N infection, with only 12 people, including two couples, having been detected.

Disclaimer: HIV Home Kit rapid home HIV instant test kits, provide a screening analysis only. Diagnosis should not be based on a single HIV test result, but only after additional clinical and laboratory HIV tests have been evaluated.