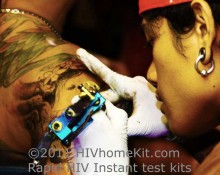 The Australian Medical Association (AMA) has warned Australian tourists that those who get tattoos in Bali take the same risks as having unprotected sex after a HIV blood test indicated an Australian citizen contracted HIV following a tattoo on the Indonesian island.

Last week the West Australian Department of Health announced that a HIV blood test on a local resident who had a tattoo while in Bali had returned a positive HIV result, but declined to reveal any further information about the person or the tattooist who is said to have caused the HIV infection.

Doctor Paul Armstrong, WA Health Department’s Director of Communicable Disease Control, said: “We would advise that you wait until you get back to this country (Australia) because there is a higher risk of developing blood-born viruses in developing countries than there is here.”

More than one million Australians a year visit Bali with the warm weather, vibrant backpacker scene in the Legian area, and cheap alcohol seeing many acting in a way they wouldn’t if back home, with a Balinese “souvenir tattoo” ranking high on the list of things done on the spur of the moment and later regretted.

David Mountain, president of the AMA West Australia branch said “people need to not park their brain when they go to a third-world country, and realize that health regulations are not going to be the same in Bali as here.

“I think it’s [getting a tattoo in Bali] high-risk behavior and it’s really the same as having sex overseas without protection.”

Nyoman Sutedja, head of the Bali Department of Health, confirmed Australian authorities had lodged a report on the incident and said inspectors would start visiting tattooists today (December 26, 2011). 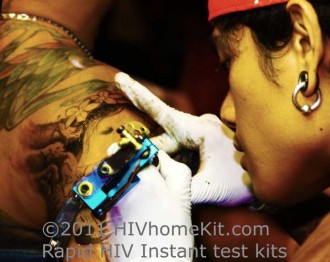 A HIV blood test from an Australian has prompted a call for anyone recently tattooed in Bali to take a HIV blood test. Photo: File

Mr. Sutedja said there was about 4,200 people living with HIV/AIDS on Bali, with official Indonesian government figures showing one in four prostitutes are HIV-positive and that the number of detected HIV cases on the island jumped about 19 percent in 2012 over the those known about in 2011.

According to Mr. Sutedja though, “we can’t say for sure if the patient caught the virus from getting a tattoo or sexual contact”.

Dr. Armstrong said people who have recently been tattooed in Bali should seriously consider having a HIV blood test and talk to their doctor about a HIV test”.