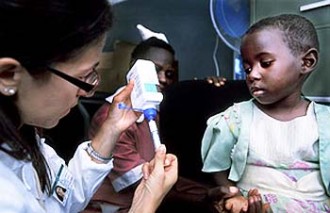 HIV / AIDS patients in developing nations will be severely hurt by the Global Fund freeze on HIV, TB & Malaria funding. Photo: Courtesy WHO

For HIV / AIDS patients in developing nations the majority of funding for treatment, care, and prevention in recent years has been supplied by the Global Fund to Fight AIDS, Tuberculosis and Malaria (Global Fund), with more than 200 million people globally benefiting from its grant disbursement programs.

However, all of that is set to come to a rapid halt following an announcement last week that the Global Fund will only be able to finance essential services for on-going programs that come to their conclusion before 2014.

Though nicely dressed up in gobbledygook double-speak, the sudden announcement has sent NGOs and those who work with HIV / AIDS patients into a frenzy, with no new programs to be funded for the next two years.

According to the official announcement the Global Fund currently has $US4 billion in its trustee account and expects to be able to fund more than $10 billion in grants for existing programs up to 2013, however a revised forecast has “significantly affected the resources available for new grant funding”. (translation: there will be no money for new projects for the next two years).

The announcement follows a nine month long review after reports of “grave misuse of its funds” in four African nations (translation: corrupt practices saw money siphoned off from programs), resulting in it appointing a general manager “to work alongside” executive director, Michel Kazatchkine.

A unique, public-private partnership between governments, civil society, the private sector and affected communities, the Global Fund has become the main financier of programs to fight HIV / AIDS, TB and malaria since its formation in 2002 and has approved funding of $22.4 billion for more than 600 programs in 150 countries.

Reaction to the sudden withdrawal of funds has been swift, with Tem Vra, program manager of the HIV / AIDS coordinating committee in Cambodia saying the decision will significantly impact HIV / AIDS patients in the kingdom, with the majority of money for HIV / AIDS medical treatment historically coming from Global Fund grants.

Mr. Trem told The Phnom Penh Post that Global Fund grants pay for the medicine of 37,000 Cambodian HIV /AIDS patients and that as of November 10, 84 percent of the $381 million in grants earmarked for Cambodia between 2004 and 2015 had been spent.

According to Mr. Trem, “this will have a big effect on Cambodia” and force NGOs and government agencies to start searching for new funding sources.

In the neighboring kingdom of Thailand, which has received almost $287 million in Global Fund grants since 2004, a seminar last week was told the average of 10,000 new HIV / AIDS patients annually is higher than projected.

Nimit Thianudom, chief of Thailand’s AIDS Access Foundation said Thailand still needs a single agency to focus on tackling the HIV / AIDS problem and that many HIV / AIDS patients in the kingdom prefer paying for expensive medicine and treatment as opposed to joining the almost free welfare scheme because of the loss of anonymity in how the scheme operates and “loss of face”.

Thailand has more than 530,000 people living with HIV / AIDS with the majority of HIV infections resulting from heterosexual sex and once led the way in world HIV prevention.

With the majority of funding for HIV / AIDS prevention, treatment and care for developing nations set to come to an end before new grants are approved in 2014, some are already questioning whether the announcement last week by UNAIDS that the 270,000 new HIV infections across South and Southeast Asia was 40 percent below the epidemics peak in 1996 might represent only a short-lived victory against spread of the disease.

Home Kit rapid home Malaria instant test kits are a qualitative immunochromatography-based one step in vitro screening test that detect Malaria pf and pv antigen in human blood and can be used for specific detection and differentiation of P. falciparum and P. vivax malaria.