A report issued by the US Centers for Disease Control and Prevention’s (CDC) National Center for Health Statistics (NCHS) shows that in 2008 drug poisoning deaths became the leading cause of injury death in the USA, with almost nine out of 10 poisoning deaths caused by drugs. 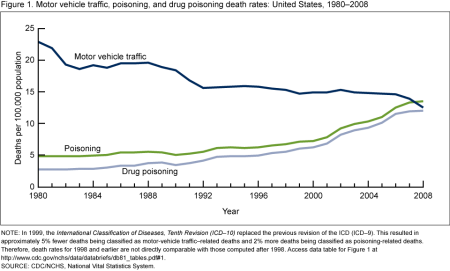 Lead author of the report, Dr. Margaret Warner, said nine out of ten of those drug poisoning deaths was from prescription drug overdose, with the most common being opiate-based pain relievers such as Percocet (oxycodone), Vicodin (hydrocodone), and OxyContin ( Note: Opium and heroin are not included ).

In 2009/2010, more than five million Americans admitted using prescription pain relievers non-medically in the prior 30-days (without a doctor’s prescription or primarily for the feeling they caused), with the majority getting the drugs from family or friends.

Noting that the the road accident death rate had fallen by 45.5 percent at the same time as drug poisoning deaths had increased by 90 as a result of the combined efforts of numerous government agencies and organizations, the authors of the report speculate that a similar comprehensive, multifaceted approach may only possibly be able to reverse the trend in drug poisoning deaths in the USA.